How to Turn a Jumper Into a Cushion Cover 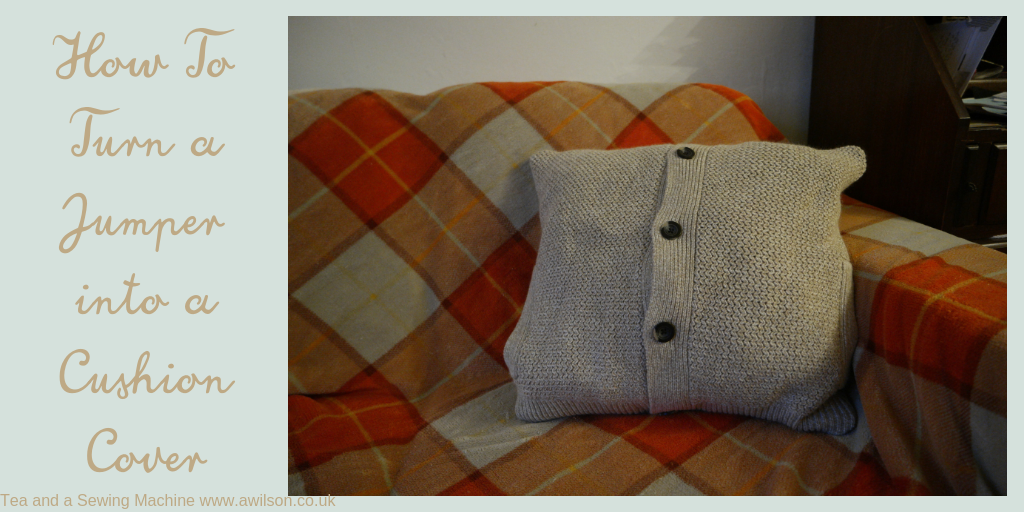 My husband turned 40 earlier this year, and among the presents he was given was this. 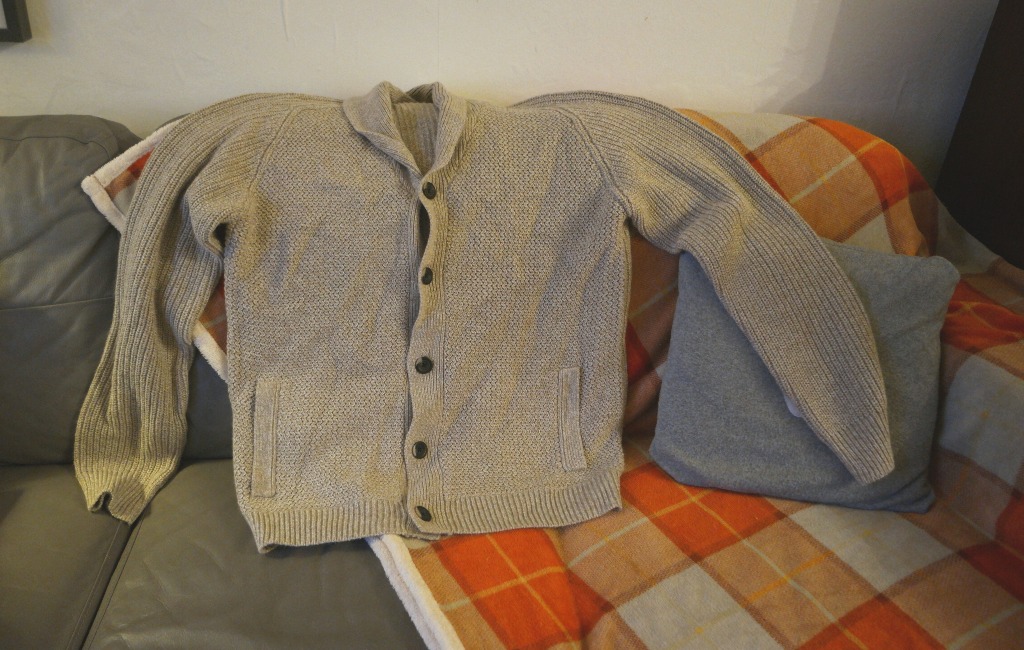 Bearing in mind that his birthday is in May, and that he never wears anything like this (he’s 40, not 80!) it was a case of politely saying thank you and then wondering what to do with it.

He was never going to wear it, but giving it away or throwing it out seemed wrong. After all, the present giver had remembered that it was his birthday and had gone to the trouble of getting him a present. They probably meant well. It was probably not a joke.

So as an alternative to offloading it onto a charity shop and then feeling guilty, I decided to turn the jumper into a cushion cover.

It was very quick and easy to do, and is a solution not only for unloved birthday presents, but also for old clothes once worn by people who were very much loved.

Keeping clothes in one’s wardrobe that used to belong to people who have since died can cause space issues. Turning a favourite jumper into a cushion cover is a way of keeping memories and little bit of that person still in your life. It could work equally well with old shirts too.

There are lots of ways to turn a jumper into a cushion cover, but I wanted to keep things as simple as possible. I also wanted to keep its jumperiness. The buttons have stayed, as have the pockets. Actually, the buttons made things easier because they serve as the opening for the cushion pad, and the pockets are useful for keeping things, like ear buds or sweets for later! 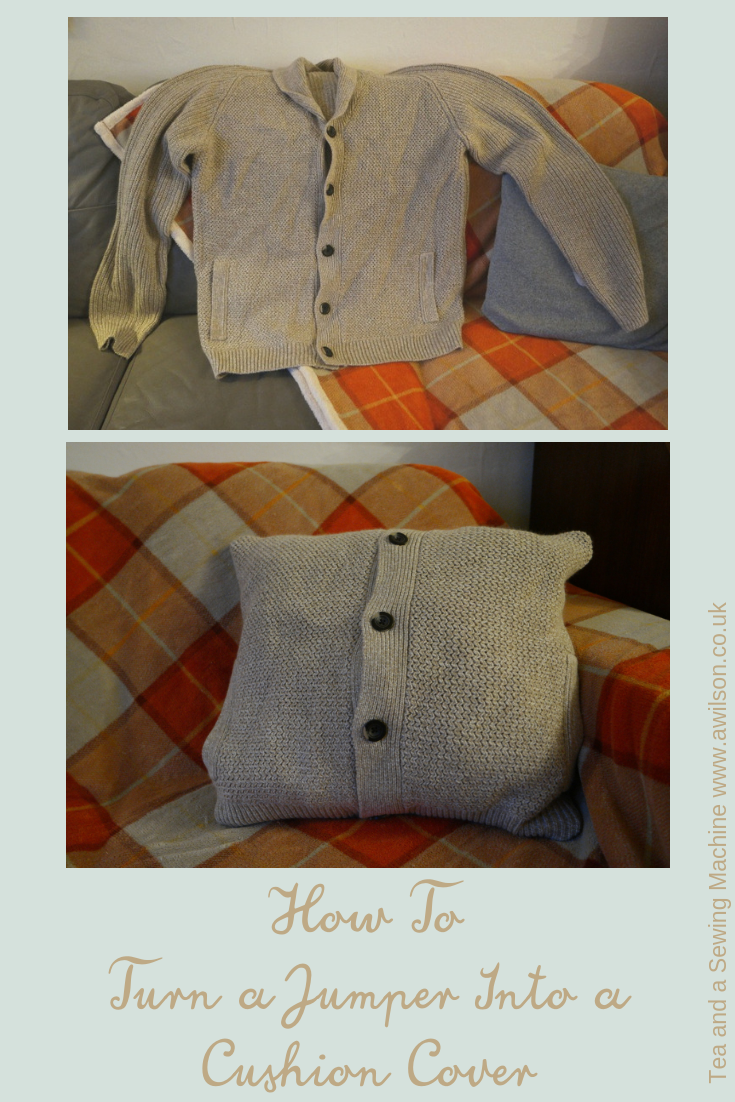 A jumper
A cushion pad (you could upcycle an old cushion or synthetic pillow. Instructions for doing this can be found here.)
Usual sewing supplies

1. Cut the top part of the jumper off, underneath the arms. 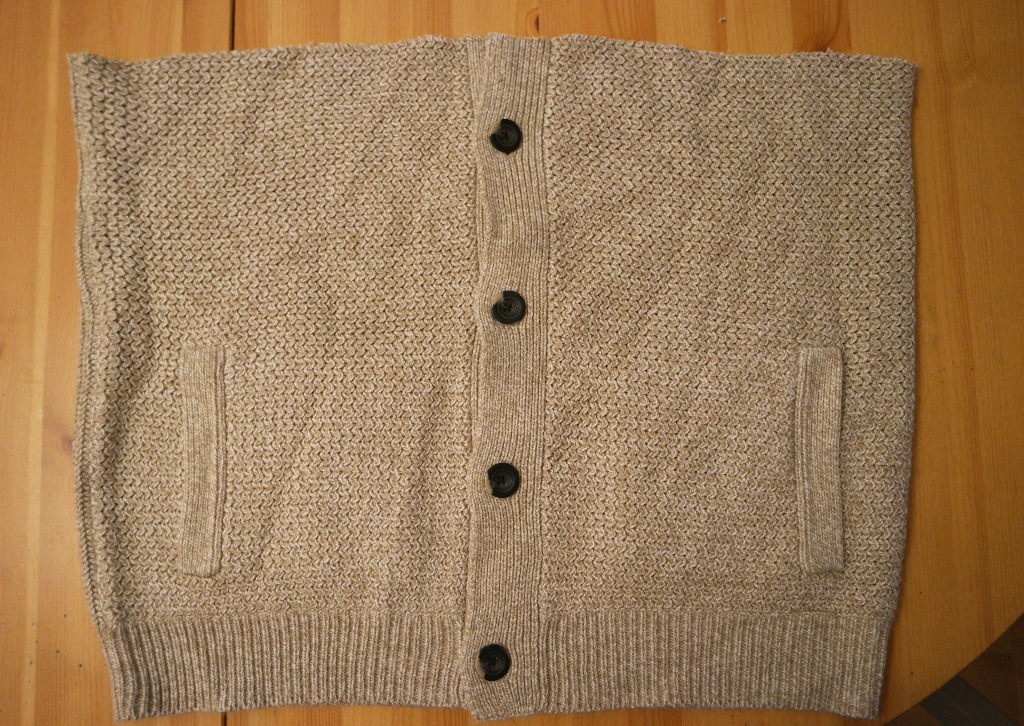 3. Turn the jumper section inside out.

4. Decide where the seams will be. I wanted the cushion cover to be squareish, so I decided to resew the side seams about 4-5 cm away from the original seams. This was as close as I could get and keep the pockets as they were. Sew the seams and trim them if necessary. 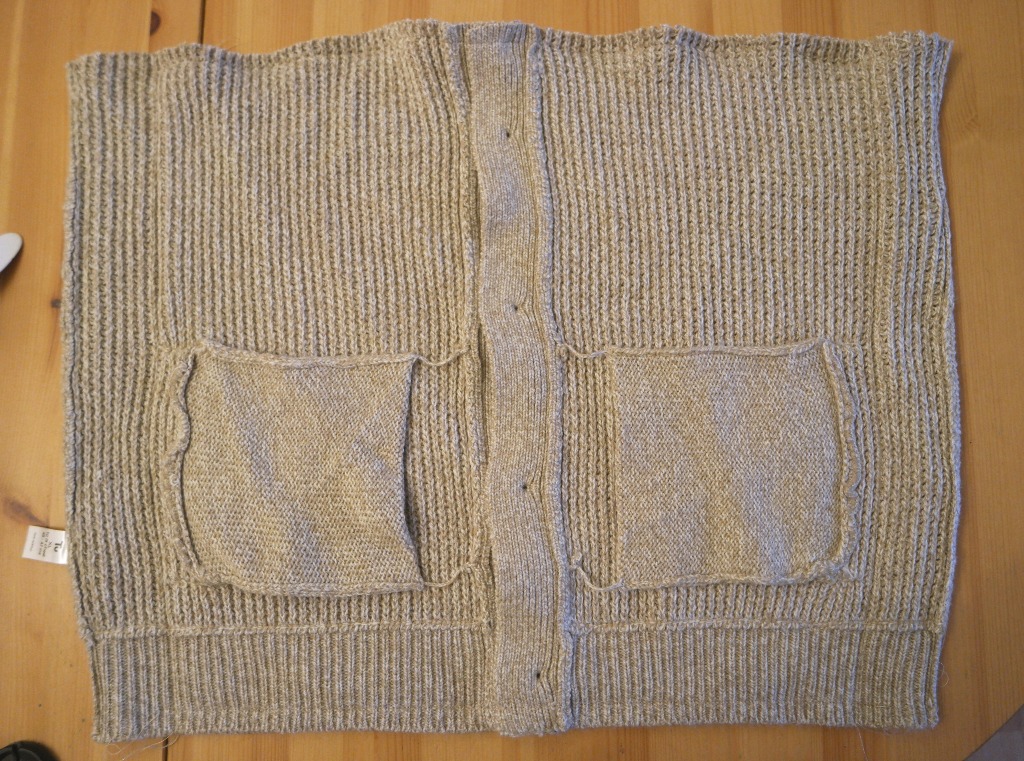 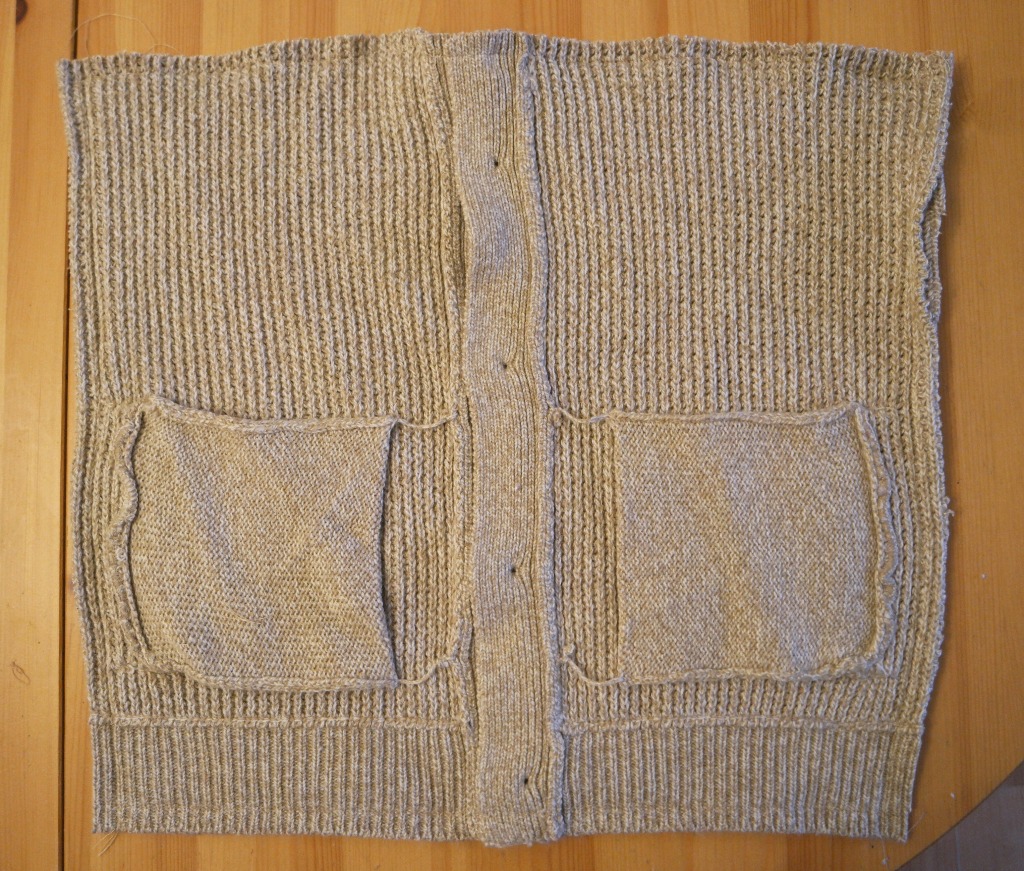 5. Sort out your cushion pad. You might have one already that you could use. Alternatively, an old pad or a synthetic pillow can be given a new lease of life if it’s washed, dried, and then pulled apart and fluffed up. There are instructions for doing this here.

6. Turn the cushion cover the right way out. Put your cushion pad inside its cover and enjoy your new cushion! 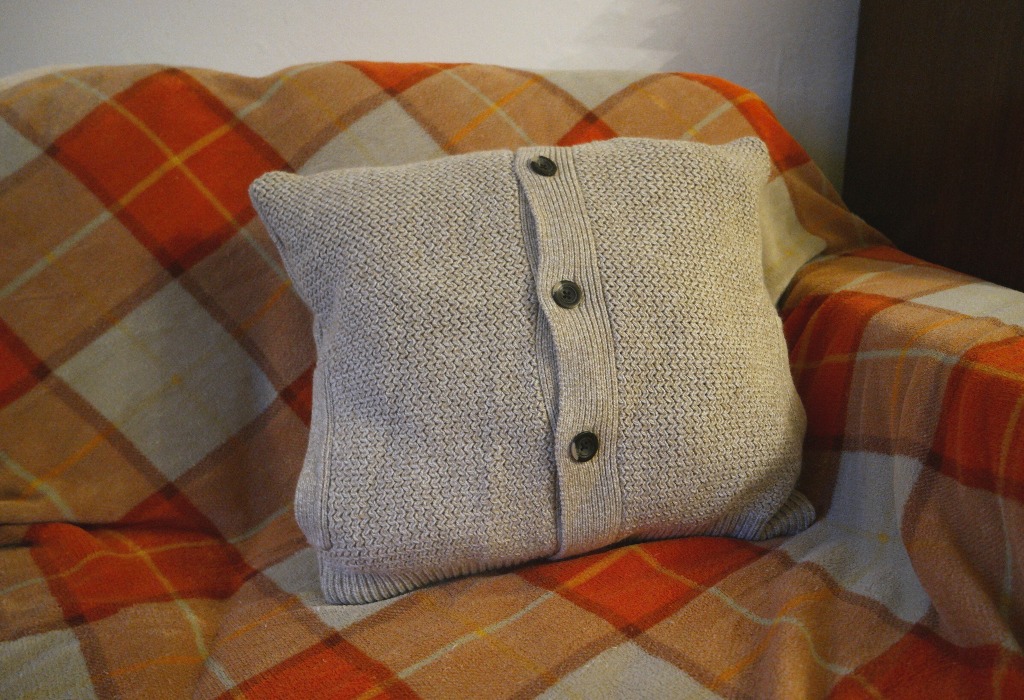 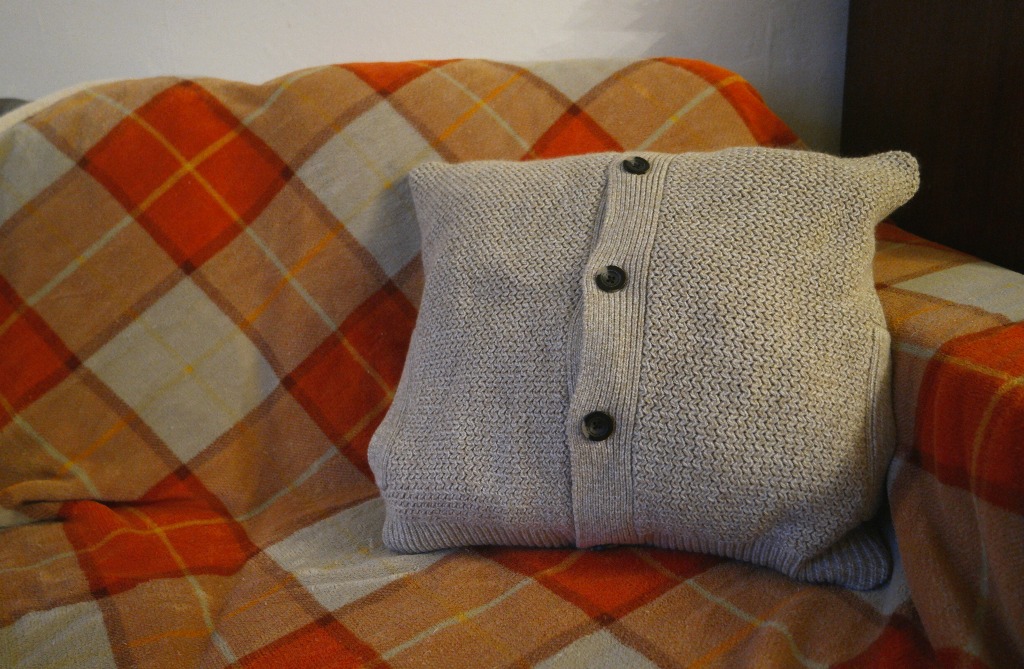 In the interests of being real, here’s a picture of my new cushion with its cushion friends and some mess. The pad of the reindeer one went weird in the wash and I haven’t sorted it out yet! 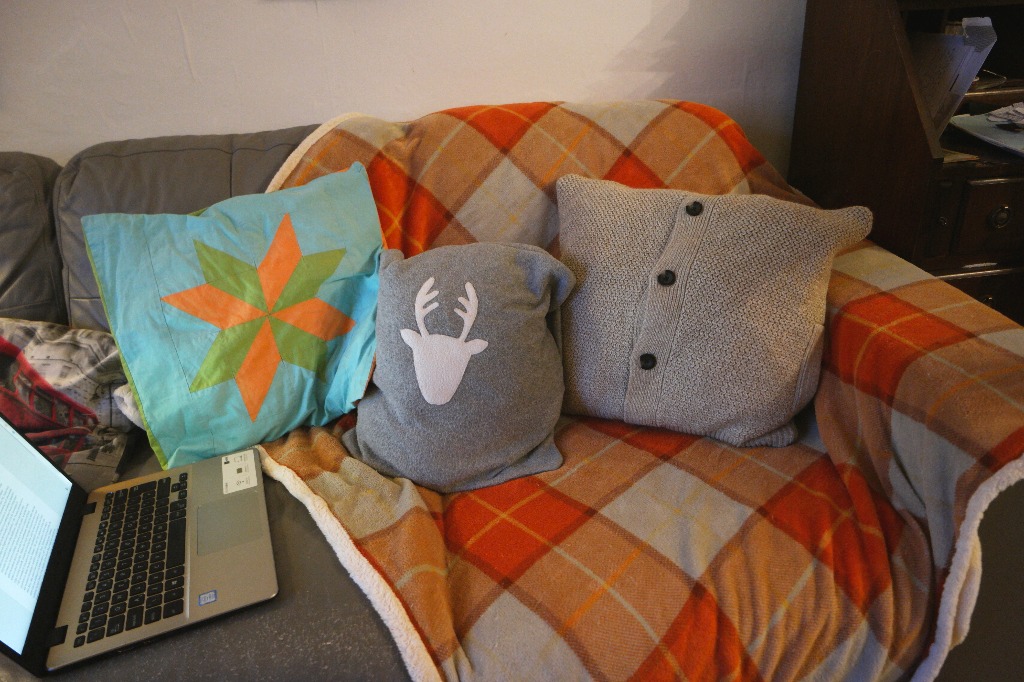