Sometimes I have an overwhelming urge to write about things that are nothing at all to do with sewing or crafts.

This is one of those times.

I love a good metaphor. Sometimes they’re the best way of expressing things.

So here are some of my favourite metaphors. And if you have one you’d like to add, please do in the comments! 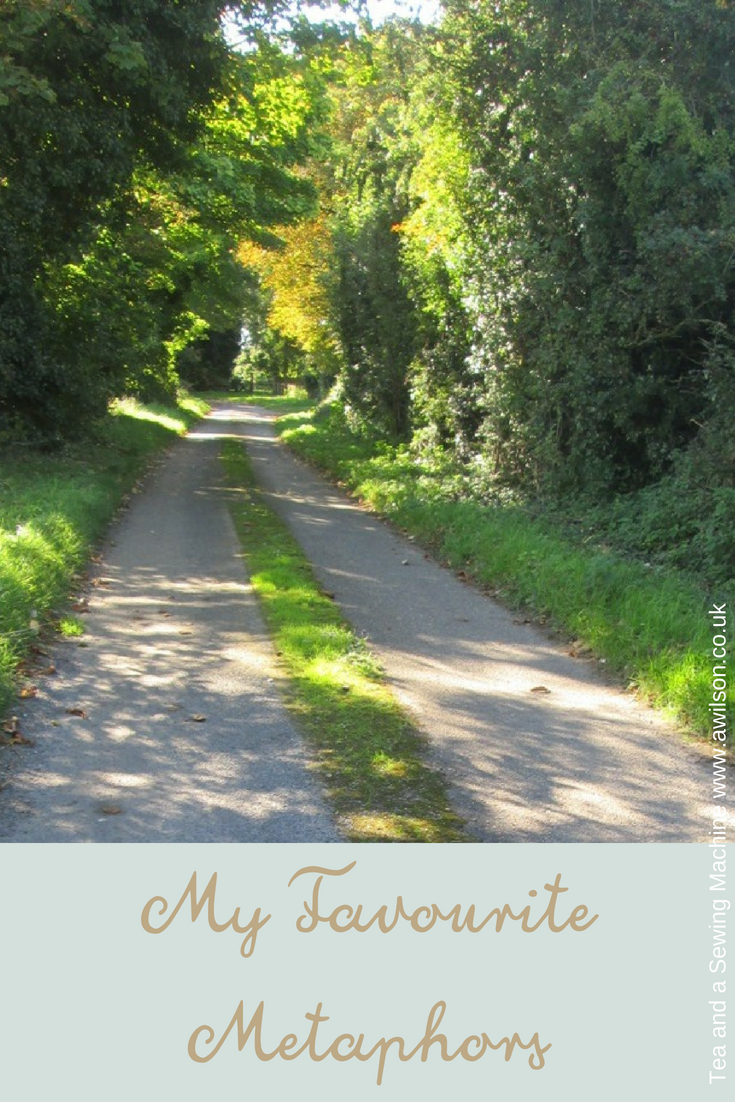 Roads With Grass Growing Down the Middle

Roads with grass growing down the middle are my favourite kind of road. Living where we do means that there are lots close by and I know where they all are!

I like them because they represent the road less travelled. They are roads that are less travelled, otherwise the grass wouldn’t be there!

I have no desire to get onto the motorway of life. I don’t want my life to be dictated by other people’s expectations. I don’t want to be heading in the same direction as everybody else because somebody who doesn’t know me or my situation at all has decided that that is the way to go.

I like trundling down little country lanes with not much idea of where I’m going. I’ll find out when I get there! Walking down these roads is such a joy. It’s peaceful, and when you do meet people on the way, they’re more likely to be kindred spirits because they’ve chosen that road too.

I want to live life in the way that suits me and my family. Different, weird and unusual are all good things. I’m going to try to run a kitchen table business instead of having a career. I want to take care of my kids myself, and that includes them not having ipads but running around outside with no shoes on. I’m going to do the school run in a tutu, and I’ve no intention of going near anything that looks like a metaphorical motorway if I can help it.

As metaphors go, this is possibly my favourite!  A warning first: maths isn’t my thing and I can’t guarantee that I’ve got this completely right.

As far as I understand it, chaos theory is when you take a group of random numbers, do some kind of maths thing to them and suddenly, there are patterns.

If you do something (I’m not sure what!) to every third number, you get a pattern of repeating triangles.

If you do something to every 6th number, you get a fern.

Other stuff can be done to the numbers which will turn a collection of messy numbers into fractals.

The reason why this is one of my favourite metaphors is because our lives so often seem to be chaotic. Stuff is going on all around us, and even with technology and everything that living in the western world offers, there’s so much we can’t control. It’s hard to make sense of things sometimes.

Chaos theory reminds us that sometimes, things might seem to be chaotic. But maybe all we need is a different persepctive. If we look at chaos in a certain way, perhaps we won’t see a random jumble of mess anymore, but something that makes perfect sense.

2 of my favourites are Tom’s Midnight Garden and The Secret Garden. I’d recommend them both, even though they’re children’s books!

Tom’s Midnight Garden (affiliate link) is about a boy who is sent to stay with his aunt and uncle because his brother has measles.

Poor Tom is cross because it’s the start of the summer holidays and he and his brother had plans to do all sorts of fun stuff out in the garden. His aunt and uncle live in an old house that’s been converted into flats. They don’t have a garden.

One night, as Tom’s lying in bed trying to sleep, he hears the clock in the hall chime 13. He gets up to investigate, but can’t see the face of the clock. He realises that if he opens the back door, it might let in enough moonlight so he can see what time the clock actually says.

Tom creeps downstairs, opens the back door and instantly forgets all about the clock. Instead of a tiny yard where bins are kept, there’s an enormous garden.

The garden is only there when everybody else is asleep, and Tom sneaks out every night. In the garden is a girl about the same age as him, called Hatty.

Night after night, Tom creeps downstairs and spends several happy hours in the garden with his friend.

But as the summer winds on, Hatty gets older. Eventually she is much older than Tom, almost grown up.

Then one night, Tom goes outside expecting to find the garden and it’s not there.

There’s a lovely twist at the end, which I’m not going to tell you because it will spoil the book if you decide to read it!

In The Secret Garden (affiliate link), several lonely, unhappy children find friendship and healing for emotional and physical hurts, which they are able to extend to adults around them.

When they find the garden, it’s been neglected and everything seems dead. But with a little bit of gardening from the children and the arrival of spring, the garden transforms itself as well of the lives of its little caretakers.

A garden represents a safe place. It’s somewhere to have adventures and to enjoy the long days of summer.

It can also represent hope. Unless it’s been dosed with large quantities of weedkiller, even if everything seems dead, it probably isn’t. Hope returns with the spring. Even if things seem hopeless, give it time and a little shoots of hope will appear.

Doors in old buildings are often interesting. There wasn’t UPVC in olden times and heavy oak doors are so much more intriguing! 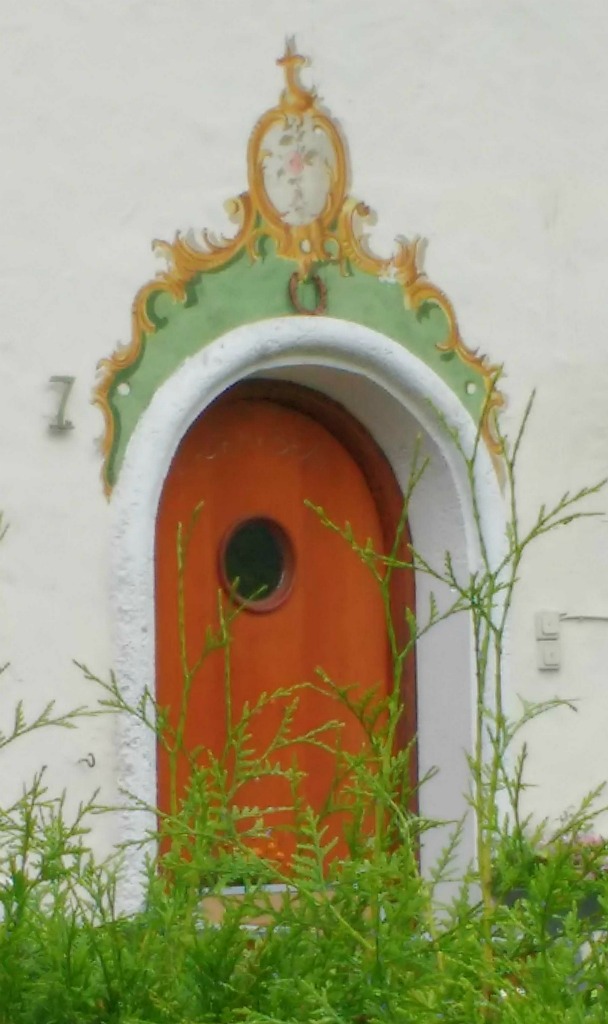 When a door is closed, we can’t see what’s on the other side. The only way to know is to open it and see!

Sometimes a door will only open if you have the key.

It might only be possible to get through the door at certain times.

You might have to wait for somebody to let you in.

Some doors will shut behind you, and you won’t be able to open them again.

A door represents a change.

It might mean not being able to go back to a previous way of life.

Certain choices can only be made at the right time, when the circumstances are right.

Making a decision sometimes depends on somebody else.

Occasionally the right choice might not obvious, and we have to hack away at the ivy to find the door that’s hidden.

I love a junk shop! They are treasure troves of possibilities. Last time I visited the one in Long Sutton, I came out with some vintage teacups, a matching cake plate and a hand embroidered vintage tablecloth.

Lots of the furniture in my house has come from IKEA. But I also have several bits that started off as tatty, unloved bits of junk. It’s amazing what a coat of paint and some new handles will do! I also like the idea of having pieces of furniture that are not the same as what everybody else has.

Tatty bits of furniture are an illustration of looking past the obvious to see the potential. We should never write people off just because their faces don’t fit, or because they are odd, or because life has knocked them about. All they need is someone to give them a chance.

When I was at university I had a lovely friend called Victoria. She had beautiful blond hair, she was very clever and she was extremely kind.

I remember one occasion when I was in a tizzy over an essay. Computer problems were compounding the other issue that I’d left it all a bit late, and I wasn’t sure whether I’d get the essay finished and handed in on time.

20 years on, I can still hear Victoria telling me that there was no need for the essay to take on supernatural proportions.

Anyway, the end of this rather boring story is that Victoria helped me with the computer issues and I got the essay finished and handed in on time.

The Stay Puft Marshmallow Man is a metaphor for something small taking on supernatural proportions.

At the end of the original Ghostbusters film, the chief ghostbuster tells the others to empty their minds and think of nothing so that the evil ghostie they’re trying to zap can’t take on a physical form and destroy the city.

Unfortunately, one of them thinks of the Stay Puft Marshmallow Man from a packet of marshmallows.

Happily the ghostbusters zap him in time and the city ends up covered in marshmallow.

For some of us, if we’re not careful, small things can end up ridiculously out of proportion. Even something like making a phone call. If I don’t, it ends up being such a big deal I either end up not doing it or being far more worried about it than is sensible!

I should probably say that the credit for the last of my favourite metaphors goes entirely to my friend Helen.

I hope you’ve enjoyed this little bit of weirdness. Next week we’ll be back to sewing tutorials!